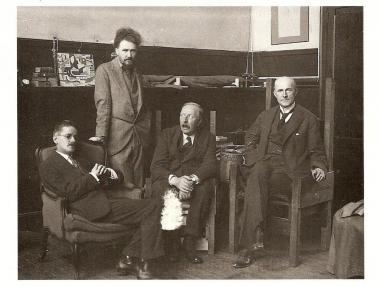 When we study the twentieth- and twenty-first centuries we turn the present into history. All the more ironic, then, that the period opened with the injunction to “MAKE IT NEW,” to break away from tradition into a pure, laboratory world of aesthetic experiment. This “modernist revolution” was played out against calamities: a worldwide war, accelerating technological upheaval, economic depression, existential despair. Thus, James Joyce’s refashioning of English conveyed the heartbreak of love and loss; Gertrude Stein pushed language to the condition of paint to express confusions in gender and national identity; Hemingway pared down prose to monosyllables to make fiction writing an ethical act. The world was a “Waste Land” — T. S. Eliot’s “heap of broken images” — and literature not only told this story but enacted it. Ugly, hermetic, elitist: it was so brilliant! As the century proceeded, the disasters piled up — another world war, the Holocaust, Vietnam, such rapid shifts in technology and communication that no one could hope to adjust. And suddenly there were new voices to hear, voices whose stories had so far remained untold. By the 1970s, unprecedented quantities of literature by women and minorities were appearing in print. The wild energy of aesthetic experiment had been tethered to the project of social change, and in imaginations as rich as Toni Morrison’s the triumph of art is no longer a betrayal of the human condition. This is the history we study as we continue to deal with the fallout of the twentieth century and explore our brave new millennium.

Relevant courses will be tagged with the attribute AE20 and AE21 in Path@Penn.