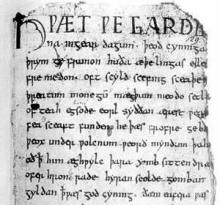 Come hear Penn poets, musicians, and medievalists respond to the great Anglo-Saxon epic, Beowulf! The episode we've chosen this year from Beowulf is a very tense story within a story, sung by the Danish court poet after Beowulf’s victory against Grendel. In this episode, Hildeburgh, a Danish princess is married to Finn, king of the Frisians (c.500). Her brother Hnaef has come to visit her, accompanied by his retainers, and a fight breaks out between the Danes and the Frisians. Hnaef is killed, as well as Hildeburgh’s son, who was the heir to the Frisian throne. Too few men survive for the battle to continue, but by now winter has set in, and the ocean is too icy for the Danes to sail home. A shaky truce is established between the Frisians and the Danes now led by Hengest. The bodies of the dead are burned together on a funeral pyre. But emotions run high, and the Danes resent being trapped in their enemy’s court, p retending to obey him as their leader.