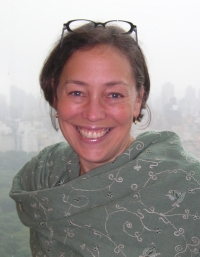 Lise Funderburg is a writer and editor based in Philadelphia. She studied at Reed College and the Columbia University School of Journalism, and her work has appeared in many publications, including The New York Times, Washington Post, Philadelphia Inquirer, National Geographic, Salon, The Nation, More, Brevity, Cleaver, Broad Street, and The Chattahoochee Review.

Her latest book is Apple, Tree: Writers on Their Parents (University of Nebraska, 2019), a collection of all-new work by 25 writers, which Publishers Weekly deemed a “sparkling anthology” in its starred review. Her previous book was Pig Candy: Taking My Father South, Taking My Father Home (Free Press, 2008), which was chosen as the Drexel University Freshman Read in 2012. Pig Candy fits into several genres—including narrative nonfiction, memoir, travelogue, and biography—but essentially, it’s a book about life, death, and barbecue.

Lise’s first book was a prescient collection of oral histories, Black, White, Other: Biracial Americans Talk about Race and Identity (Morrow, 1994), the first book to explore the lives of adult children of black-white unions. Black, White, Other, expanded and re-released on its 20th anniversary, has become a core text in the study of American multiracial identity. In her New York Times review of Black, White, Other, Kyoko Mori wrote that the book is “an example of how we can talk about race with feeling, humor, and dignity.”

Lise has been awarded residencies at the Civitella Ranieri Foundation, MacDowell Colony, Thurber House, and Blue Mountain, among others, and she won a Nonfiction Fellowship from the Pennsylvania Council on the Arts. She is a lecturer in creative writing at the University of Pennsylvania and teaches at the Paris Writers’ Workshop.