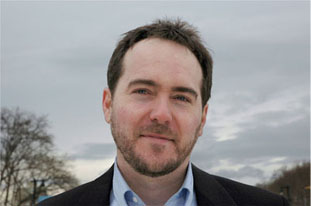 Thomas Devaney is poet, critic, and a Senior Writing Fellow in the Critical Writing Program, English Department at the University of Pennsylvania.  He is the author of A Series of Small Boxes (Fish Drum, 2007), Letters to Ernesto Neto ( Germ Folios, 2005), and The American Pragmatist Fell in Love (Banshee Press, 1999). He was the editor of The Art of the Book Lunch (Van Pelt Books, 2009).

Devaney has been a Pre-Major Advisor for the College of Arts and Sciences since 2007; he has also taught graduate classes in Creative Writing for The College of Liberal and Professional Studies (LPS) in their Master of Liberal Arts program.

Devaney received his MFA in Creative Writing at Brooklyn College, CUNY in 1998. In 2001 he joined the Kelly Writers House, Penn's literary hub, for four years as program coordinator and producer of the monthly radio program "Live at the Writers House," on 88.5-FM WXPN.

His poems have been published in The American Poetry Review, jubliat, Fence, Jacket, and online at PennSound. Anthologies include A Best of FENCE: The First Nine Years (FENCE Books, 2009), POEM: Poets On (an) Exchange Mission (Fish Drum/Double Change, 2009 bilingual French-English edition), Walt Whitman, Hom(m)age, 2005/1855 (Turtle Point Press and Editions Joca Seria, 2005) and American Poetry: The Next Generation (Carnegie Mellon 2000). His reviews and essays have been published in The Philadelphia Inquirer, The Poetry Project Newsletter, Jacket, The Boston Review, and Rain Taxi.

ENGL 010.200 Creating Possibilities in Creative Non-Fiction and Poetry
ENGL 125.304 The Art of Eating and Life