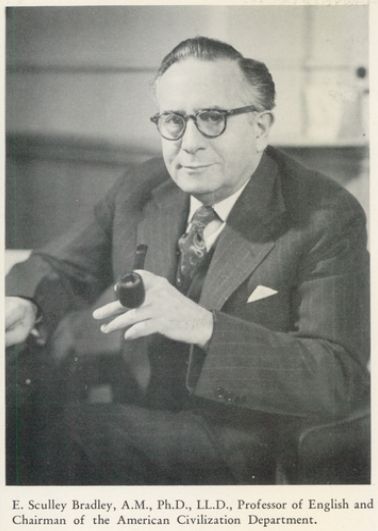 Sculley Bradley was a prolific writer and editor, serving as assistant literature editor of the Philadelphia Record from 1930 to 1931 and editor of the  General Magazine and History Chronicle in Philadelphia from 1945 to 1956. He published biographies of literary figures George Henry Boker and Henry Charles Lea, as well as several editions of the important and popular anthology,  The American Tradition in Literature. He also published editions of works by Mark Twain, Stephen Crane, Nathaniel Hawthorne, and Walt Whitman. Bradley was considered an international expert on Whitman, editing several important editions of the poet's  Leaves of Grass, including the 1949 Rinehart edition, the Comprehensive Reader's Edition in 1965, a Norton Critical Edition in 1973 and  A Textual Variorum in 1980. He was also a general editor and contributed to the 14-volume  Collected Writings of Walt Whitman from 1961 to 1984.

While at Penn, Sculley Bradley maintained a long association with many important writers of his day. He was instrumental in the University acquiring numerous important literary collections, including the Walt Whitman collection, the James T. Farrell papers, the William Carlos Williams research collection, the George H. Boker papers, the Henry Charles Lea papers, and the Theodore Dreiser papers. He was a trustee of the Walt Whitman Foundation, and a member of the Franklin Inn Club, the Athenaeum of Philadelphia, Phi Beta Kappa, Delta Sigma Rho, and Alpha Chi Rho. He was a fellow of the Society of American Studies and the American Association of University Professors, and chairman of the American Literature Group of the Modern Language Association from 1937 to 1938. He was a member of the Society of Friends and was a founding member of Chestnut Hill Monthly Meeting, and served on the board of Germantown Friends School and Friends Hospital. He was married to Marguerite C. Bradley and had two daughters, Deborah B. Oberholtzer and Alison B. Wilhelm.

Hubert Wayne Smith "Some American Fiction Writers and their Reviewers: A Study of the Reviews and Reviewers in Connection with Eight Representative Fiction Writers, 1918-1941"

Caspar H. Nannes "Politics in the American Drama, As Revealed by Plays Produced on the New York Stage, 1890-1945"

Frederick William Connor "Cosmic Optimism: A Study of ther Interpretation of the idea of Evolution by American Poets from Ralph Waldo Emerson to Edwin Arlingont Robinson"
Sonia Raiziss "The Relation of Certain Modern Poets to the Metaphysical Poets of the Seventeenth Century"