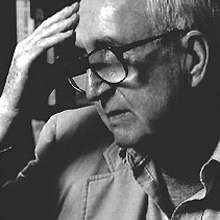 Robert Lucid had a background in 19th and 20th century American literature and in the study of Modernism across cultures.  He taught courses concerning mass-audience literacy and literature in America. His research interests focused on Norman Mailer, about whom he had edited two books.  He was in the process of completing Mailer's authorized biography before he passed away.  For his teaching he was awarded both the Lindback Award for Distinguished Teaching and the Ira Abrams Award.

Robyn Landis "The Family Business: Problems of Identity and Authority in Literature, Theory, and the Academy"
Gail McDonald "Learning to be Modern: Pound, Eliot, and the American University"

Richard A. Betts "The Use of Historical Materials by Five Contemporary American Writers"
Griffith Dudding "Between Two Worlds: An Analysis of J.P. Donleavy's Use of "The Outsider" as Protagonist in His Novels "
Judith A. Scheffler "The 'Ultra-Character' in Postwar American Fiction: A Study of the Progressive Abstraction of Characterization in Novels from the 1950's to the Present"

Carol K. Scholz "They Share the Suffering: The Psychoanalyst in American Fiction between 1920 and 1940"

Marsha A. Freeman "Van Wyck Brooks and Newton Arvin: Their Friendship and Correspondence"
Rebecca McBride "Richard Wright's Use of His Reading"

Brian Gallagher "The Historical Consciousness of Edmund Wilson"
Honora F. Rankine-Galloway "The Impact of the 1961 Tropic of Cancer Publication on the American Literary Community"

Daniel Bronson "In Pursuit of the Elusive Present: A Study of the Prose Narratives and Poetry of Norman Mailer"
Ellen E Morgan "Neo-Feminism and Modern Literature "
Jeffrey Woodward "The Fitzgerald Legend"

ENGL 293.302 The Literary Imagination and the Idea of the University