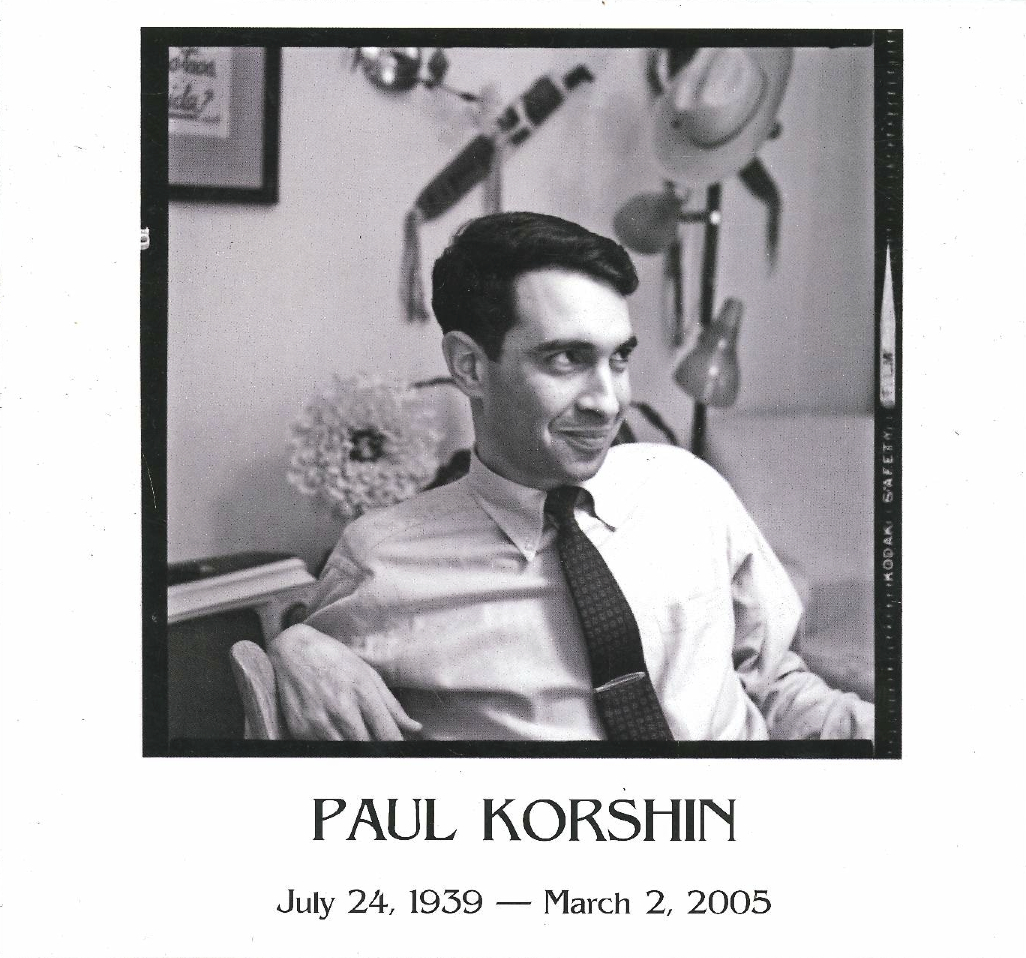 Dr. Korshin was an internationally known scholar of Eighteenth Century British literature, author or editor of many books, including Typologies in England, 1650-1820, published in 1982, and dozens of articles and reviews. He was a founder of the American Society for Eighteenth-Century Studies, and was instrumental in the creation of the English Short-Title Catalog, the most comprehensive bibliographic database of works printed before 1800. The ESTC was one of the first major online resources for scholarly research, making possible an entire generation of scholarship on the history of the book. Dr. Korshin also founded The Age of Johnson: A Scholarly Annual, and edited all 15 of its volumes to date, more than 8,000 pages; he was proofreading pages for volume 16 in his hospital room.

He received a Guggenheim Fellowship in 1987-88, and was a Rockefeller Foundation Scholar-in Residence at Bellagio in 1988.

A generous philanthropist, Dr. Korshin supported many scholarly initiatives financially as well as intellectually, concentrating his philanthropic activity on learned societies and institutions of higher learning, according to his wife, Dr. Joan Pataky-Kosove. At Penn, he served as a member of several University Council committees, including Admissions and Financial Aid, Bookstore, and Community Relations.

Born and raised in New York City, Dr. Korshin graduated from City College and earned his Ph.D. from Harvard. Coming directly to Penn as an assistant professor, he rose through the ranks, becoming an associate professor in 1971 and a full professor in 1980. He served as the director of the department's Penn-in-London program at Kings College in 1993-94.

"A witty and flamboyant lecturer, Dr. Korshin taught the English department's most popular class, on 'Madness and Literature,' packing the campus's largest lecture halls with students eager to hear both his learned commentary and his entertaining asides on current cultural and political events," said Dr. John Richetti, professor of English. Always dressed immaculately in custom-tailored Savile Row suits and bow ties, he stood out sharply from the relaxed sartorial norms on campus. He was known as well for his Cordon-Bleu culinary skills and memorable dinner parties. He once arrived at a brown-bag lunch in the English department offices with a wicker picnic basket containing duck á l'orange and a half bottle of claret," Dr. Richetti added. "Paul did everything with great style and flair," said Dr. James English, chair of the department and a longtime colleague. "He was an extraordinary, inimitable presence, both a valued member of the Penn community and a kind of institution unto himself."

Dr. Korshin is survived by his wife, Dr. Joan Pataky-Kosove, CW '63, GSAS '76. He is also survived by his two step-children, Andrew A. Kosove and Alexis A. Moran, and his brothers, Dr. Jonathan Korshin and Dr. Oliver M. Korshin.

Jack Lynch "The Revival of Learning: The Age of Elizabeth in the Age of Johnson"

Mary V. Yates "The Dancing Socrates: The Aestheticization of Moral Philosophy in Enlightenment England and America"

ENGL 245.301 The Nouveaux Riches in English and American Literature
ENGL 543.301 Samuel Johnson and His Circle

ENGL 044.800 Madness and English Literature : The Eighteenth and Nineteenth Centuries