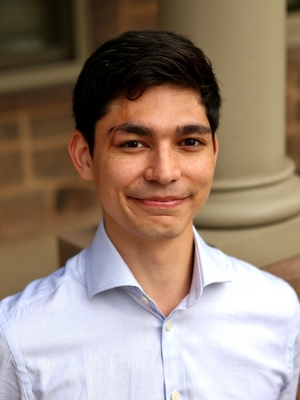 Chris Jimenez is a doctoral candidate in English at Penn. His research examines the discourse of catastrophe in 20th- and 21st-century global Anglophone literature, with interdisciplinary interests in ecocriticism, nuclear criticism, animal studies, biopolitics, and the sociology of literature. His dissertation, "The Exploding Globe: Scale and Catastrophe in Contemporary Anglophone Literature," argues that engaging with real and imagined catastrophe has allowed contemporary authors to expand the representational scale of literature beyond national boundaries and produce distinctly global forms of politics and aesthetics. To this end and aided by a Penfield Dissertation Research Fellowship, Chris traveled to Japan in Fall 2015 to study nuclear disaster and its global literary representations in Hiroshima, Nagasaki, and Fukushima.

Chris also has an abiding interest in the digital humanities and has worked on numerous DH projects, including the Contemporary Fiction Database Project with Jim English. Formerly a Fontaine Fellow, Chris is now an inaugural Andrew W. Mellon Price Lab Doctoral Fellow in the Digital Humanities for 2016-2017, contributing to the Price Lab's Mellon Seminars and DH project incubation. His DH and web design work are on display in more detail at his website, Novels by Numbers, as well as the newly redesigned Penn English department website, which he helped overhaul in Spring 2015. Chris has taught or assisted teaching classes on hardboiled detective fiction and film noir, positive psychology, British literature since 1900, representations of the Vietnam War, and computational interpretation in the humanities.

As of May 2015, Chris also serves as the Assistant Director for Communications at the Penn Center for Minority Serving Institutions, working as the Center's resident copy editor, graphic designer, and grant writer. Prior to this position, he directed various student development programs for Penn's Graduate Student Center, including Year of Sound graduate events in 2013-2014 and grant-writing workshops, conferences, and peer-to-peer advising in 2014-2015. Additionally, he served as the Vice President of the Graduate English Association in 2014-2015 and has taught a variety of writing seminars for the Critical Writing Program, the College of Liberal and Professional Studies (LPS), and the Pre-Freshman Program (PFP). Finally, in collaboration with other Penn English graduate students, Chris helped organize a conference on contemporary literature and new media called Locating Post-45 in March 2015 and co-coordinated Latitudes throughout 2012-2013, helping the graduate reading group engage with scholars working on race, postcolonialism, globalization, and transnationalism.

ENGL 102.403 The Vietnam War In Literature and Film