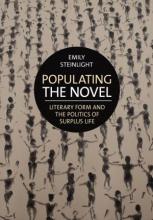 ResVic: Celebration and Discussion of Populating the Novel by Emily Steinlight
Special Meeting of the Res-Vic Working Group


About Populating the Novel: Literary Form and the Politics of Surplus Life by Emily Steinlight

From the teeming streets of Dickens’s London to the households of domestic fiction, nineteenth-century British writers constructed worlds crammed beyond capacity with human life. In Populating the Novel, Emily Steinlight contends that rather than simply reflecting demographic growth, such pervasive literary crowding contributed to a seismic shift in British political thought. She shows how the nineteenth-century novel in particular claimed a new cultural role as it took on the task of narrating human aggregation at a moment when the Malthusian specter of surplus population suddenly and quite unexpectedly became a central premise of modern politics.

In readings of novels by Mary Shelley, Elizabeth Gaskell, Charles Dickens, Mary Braddon, Thomas Hardy, and Joseph Conrad that link fiction and biopolitics, Steinlight brings the crowds that pervade nineteenth-century fiction into the foreground. In so doing, she transforms the subject and political stakes of the Victorian novel, dislodging the longstanding idea that its central category is the individual by demonstrating how fiction is altered by its emerging concern with population. By overpopulating narrative space and imagining the human species perpetually in excess of the existing social order, she shows, fiction made it necessary to radically reimagine life in the aggregate.

"Populating the Novel is a tremendously impressive book. Steinlight expertly demonstrates how thoroughly the Victorians—famous for their ‘individualism’—conceived of human life in the aggregate. Her book will quickly become a touchstone in nineteenth-century literary studies and the definitive study of biopolitics in Victorian fiction." - David Kurnick, Associate Professor of English, Rutgers University