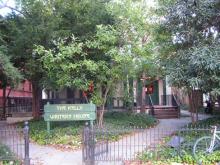 The Economy of Prestige: Literary Prizes in the 21st Century
Jim English, Al Filreis, and Michael Kelleher in conversation

Jim English is John Welsh Centennial Professor of English at Penn, Director of the Penn Humanities Forum, and Director of the Price Lab for Digital Humanities. His main fields of research are the sociology and economics of culture; the history of literary studies as a discipline; and British fiction, film, and television since the 1930s. His books include Comic Transactions: Literature, Humor, and the Politics of Community in Twentieth-Century Britain (Cornell 1994), The Economy of Prestige: Prizes, Awards, and the Circulation of Cultural Value (Harvard 2005), and The Global Future of English Studies (Blackwell, 2012).

Michael Kelleher is director of the Windham-Campbell Literature Prizes at Yale University and the former Artistic and Associate Director of Just Buffalo Literary Center in Buffalo, NY. His third poetry collection, Visible Instruments, is forthcoming from Chax Press. From 2008-2013 he produced Aimless Reading, a blog project in which he photographed, catalogued, and wrote about the more than 1200 titles in his library.