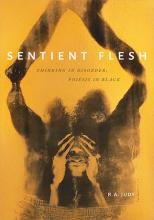 
In Sentient Flesh R. A. Judy takes up freedman Tom Windham’s 1937 remark “we should have our liberty 'cause . . . us is human flesh" as a point of departure for an extended meditation on questions of the human, epistemology, and the historical ways in which the black being is understood. Drawing on numerous fields, from literary theory and musicology, to political theory and phenomenology, as well as Greek and Arabic philosophy, Judy engages literary texts and performative practices such as music and dance that express knowledge and conceptions of humanity appositional to those grounding modern racialized capitalism. Operating as critiques of Western humanism, these practices and modes of being-in-the-world—which he theorizes as “thinking in disorder,” or “poiēsis in black”—foreground the irreducible concomitance of flesh, thinking, and personhood. As Judy demonstrates, recognizing this concomitance is central to finding a way past the destructive force of ontology that still holds us in thrall. Erudite and capacious, Sentient Flesh offers a major intervention in the black study of life.Co-sponsored by the AmLit Working Group

R.A. Judy is Professor of Critical and Cultural Studies in the Department of English at the University of Pittsburgh, and a member of the boundary 2 Editorial Collective. With degrees in philosophy and comparative literature, Judy’s work has spanned the fields of philosophy and critical theory, cultural and black studies, as well as Arabic and Islamic literature and thought. His publications include (Dis)forming the American Canon: The Vernacular of African Arabic American Slave Narrative, “Kant and the Negro,” “The Question of Nigga Authenticity,” “Dreaming About the Singularity of the New Middle Ages: Three Provisional Notes on the Question of Imagination,” and more recently, “Restless Flying, A Black Study of Revolutionary Humanism,” as well as his new book, Sentient Flesh (Thinking in Disorder/Poiēsis in Black).