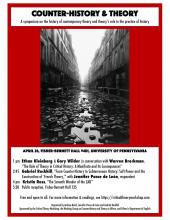 
This event is free and open to the public

Every presentation will include ample time for discussion and debate.


1 pm
Ethan Kleinberg and Gary Wilder in conversation with Warren Breckman, “The Role of Theory in Critical History: A Manifesto and Its Consequences.” Material for discussion: “Theses on Theory and History” (2018) by Ethan Kleinberg, Joan Wallach Scott and Gary Wilder

2:45     Gabriel Rockhill, “From Counter-History to Subterranean History: Soft Power and the Construction of ‘French Theory,’” on the effects of the CIA’s cultural Cold War. Respondent: Jennifer Ponce de León

Warren Breckman is the Sheldon and Lucy Hackney Professor of History at the University of Pennsylvania, where his work focuses on modern European intellectual and cultural history. His books include Karl Marx, the Young Hegelians, and the Origins of Radical Social Theory: Dethroning the Self (1999); European Romanticism: A Brief History with Documents (2007, 2015); and Adventures of the Symbolic: Postmarxism and Radical Democracy (2013).  He is currently working on three projects: The Machiavellian Moment in Modern Thought; a micro-history of World War One based on the diaries of a Canadian cavalryman; and The Cambridge History of Modern European Thought (forthcoming, 2019) which he is editing with Peter E. Gordon.

Ethan Kleinberg is Professor of History and Letters at Wesleyan University and Editor-in-Chief of History and Theory. He is the author of Haunting History: for a deconstructive approach to the past (Stanford U Press), Generation Existential: Martin Heidegger’s Philosophy in France, 1927-61 (Cornell U Press), and co-editor of the volume Presence: Philosophy, History, and Cultural Theory for the Twenty-First Century (Cornell U Press). As a member of the Wild On Collective he is co-author (with Joan Wallach Scott and Gary Wilder) of the Theses on Theory and History.

Jennifer Ponce de León is Assistant Professor of English at the University of Pennsylvania, where she is also faculty in Latin American and Latino Studies. Her forthcoming book Another Aesthetics is Possible: Arts of Rebellion in the Fourth World War (2019) examines experimental and extra-institutional visual art, literature, and performance produced since the late 1990s that is articulated with antisystemic movements in the Americas, including Zapatismo, anti-displacement struggles in Los Angeles, and radical human rights activism and other urban social movements in Argentina. She is Associate Director of the Critical Theory Workshop/Atelier de Théorie Critique and a 2018-2019 Ford Postdoctoral Fellow.

Gabriel Rockhill is a philosopher, cultural critic and political theorist. He is Associate Professor of Philosophy at Villanova University and Founding Director of the Critical Theory Workshop/Atelier de Théorie Critique at the Sorbonne and the Ecole des Hautes Etudes en Sciences Sociales. His recent books include Counter-History of the Present: Untimely Interrogations into Globalization, Technology, Democracy (2017), Interventions in Contemporary Thought: History, Politics, Aesthetics (2016) and Radical History & the Politics of Art (2014). In addition to his scholarly work, he has been actively engaged in extra-academic activities in the art and activist worlds, as well as a regular contributor to public intellectual debate. For more information: https://gabrielrockhill.com

Kristin Ross, Professor Emeritus of Comparative Literature at New York University, is known for her work on French literature and culture of the 19th, 20th, and 21st centuries. She is the author of Communal Luxury: The Political Imaginary of the Paris Commune (2015); May '68 and its Afterlives (2002); Fast Cars, Clean Bodies: Decolonization and the Reordering of French Culture (1995), for which she was awarded a Critic's Choice Award and the Lawrence Wylie Award for French Cultural Studies; and The Emergence of Social Space: Rimbaud and the Paris Commune (1988). She has also translated several works from French, including Jacques Ranciere's The Ignorant Schoolmaster and The ZAD and NoTAV: Territorial Struggles and the Making of a New Political Intelligence (Verso, 2018) by the Mauvaise Troupe Collective.

Gary Wilder is a Professor in the Ph.D. Programs of Anthropology and History, and Director of the Committee on Globalization and Social Change at the Graduate Center of the City University of New York. He is the author of Freedom Time: Negritude, Decolonization, and the Future of the World (2015) and The French Imperial Nation-State: Negritude and Colonial Humanism Between the World Wars (2005). He is co-editor of two books: The Postcolonial Contemporary: Political Imaginaries for the Global Present, with Jini Kim Watson (2018) and The Fernando Coronil Reader: The Struggle for the Life is the Matter, with Mariana Coronil, Laurent Dubois Paul Eiss, Edward Murphy, David Pedersen, and Julie Skurski, (forthcoming, 2019). He is currently completing a book entitled “Untimely History, Unhomely Times: On the Politics of Temporality and Solidarity” and working on a another about black radical humanism in the Atlantic world provisionally entitled “After the Revolution, or More Abundant Life.”