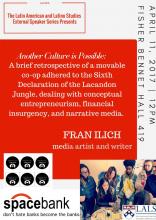 Media artist and writer Fran Ilich will present “Another Culture is Possible. A brief retrospective of a movable co-op adhered to the Sixth Declaration of the Lacandon Jungle, dealing with conceptual entrepreneurism, financial insurgency, and narrative m
Presented by Jennifer S. Ponce de León


Fran Ilich is a media artist and writer based in New York City. He is the author of the novels Metro-pop, Tekno Guerrilla, Circa 94 and a monograph on narrative and ideology, Otra Narrativa es Posible, which is forthcoming in an English translation. His most recent project was Aridoamérica Winter Plan for which he created a  neighborhood coffee co-op in Brooklyn that welcomed visitors to convene, converse and barter for Zapatista organic coffee while playing the Nahuatl game of Patolli. In 2013 Ilich created the anticolonial alternate reality game, Raiders of the Lost Crown, which was organized around the idea of the restitution of Moctezuma’s famed headdress, which is displayed in Austria. Ilich’s other work in media art and social art have included the virtual community bank Spacebank the Brooklyn Stock Exchange, and the Diego de la Vega Cooperative Media Conglomerate. Under the aegis of Diego de la Vega, Ilich founded a community newspaper in Tijuana, an internet radio production cooperative, the Tijuana Media Lab, Fiction Department press, and the virtual currency of Digital Material Sunflowers. Ilich also founded the Diego de la Vega Coffee Co-op, which sells organize coffee produced by Zapatista production cooperatives in activist and cultural events. Ilich has participated as an artist in Berlinale Talent Campus, Transmediale, ARCO, Documenta 12 and 13, the EZLN’s Festival Mundial de la Digna Rabia among other events, and he also has shown at the Walker Art Center, Creative Time Living as Form, Open Engagement and Bronx Museum. He has been a Fellow at Eyebeam and A Blade of Grass in New York City and has recently produced work by commission the International Studio & Curatorial Program, the New School’s Vera List Center for Art and Politics and No Longer Empty.

Refreshments will be provided.