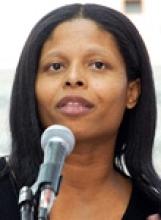 
Margo Natalie Crawford studies 20th and 21st century African American literature and the full interdisciplinary spin of global black studies. She is most known for her work on the 1960s and 70s Black Arts Movement. Her ongoing work is situated in black radical imaginations, with a particular interest in radical black feminism, black diaspora theory, and black queer theory. She is the author of Dilution Anxiety and the Black Phallus (Ohio State University Press, 2008) and the coeditor, with Lisa Gail Collins, of New Thoughts on the Black Arts Movement (Rutgers University Press, 2006). Her essays appear in a wide range of books and journals, including The Trouble With Post-Blackness, Want to Start a Revolution?, The Modernist Party, The Cambridge Companion to American Poetry Post-1945, Callaloo, American Literature, Souls, Black Renaissance Noire, Black Camera, Publishing Blackness, and the exhibition catalog for the 2013 AfriCOBRA exhibit at the DuSable Museum. She has recently completed a manuscript entitled Black Post-Blackness: the Black Arts Movement and 21st Century Black Aesthetics. Her works in progress include What is African American Literature? and a coedited volume Global Black Consciousness. She is on the editorial board of the Society for Textual Scholarship, the James Baldwin Review, and the Wiley Blackwell Anthology of African American Literature. She is the faculty director of Cornell’s Mellon Mays Undergraduate Research program.