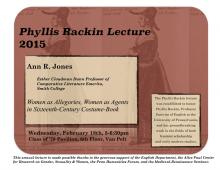 The lecture will be followed by a reception.

Ann R. Jones, Esther Cloudman Dunn Professor of Comparative Literature Emerita, Smith College (Ph.D. Cornell University) specializes in early modern literature and culture. Her first book, The Currency of Eros: Women's Love Lyric in Europe, 1540–1620 (Indiana University Press, 1990), focused on eight female poets in England, Italy, and France. Since then she has translated the work of a 16th-century Venetian courtesan and written extensively on women’s fashion and identity formation in early modern Italy, France, and England. Her current project, Global Habits, explores the Renaissance Costume book and considers texts alongside textiles to develop an understanding of the genre of the costume book from 1550-1650. Her work on women, gender, and material culture has been of great importance to feminist studies of literature, culture and history. In particular, Professor Jones has been instrumental in bringing discussion of French feminism to the US academy. Professor Jones acted as the Chair of the Comparative Literature Department at Smith College from 1983 to 2006 and served as a Board member of the Study of Women and Gender Department at Smith from 1995 to 2005.

The Phyllis Rackin lecture was established to honor Phyllis Rackin, Professor Emerita of English at the University of Pennsylvania, and her groundbreaking work in the fields of both feminist scholarship and Early Modern studies. A former President of the Shakespeare Association of America, she has published numerous scholarly articles on Shakespeare and related subjects in anthologies and in such journals as PMLA, Shakespeare Quarterly, and Shakespeare-Jahrbuch. She has also published four books on Shakespeare: Shakespeare's Tragedies; Stages of History: Shakespeare's English Chronicles; and Engendering a Nation: A Feminist Account of Shakespeare's English Histories, which she wrote in collaboration with Professor Jean Howard of Columbia University; and Shakespeare and Women. Her awards include an ACLS fellowship and a Lindback award for distinguished teaching.

This annual lecture is made possible thanks to the generous support of the English Department, the Rackin Fund, the Gender, Sexuality & Women’s Studies Program, the Medieval-Renaissance Seminar, and the Penn Humanities Forum.