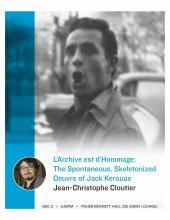 
A Lecture by Jean-Christophe Cloutier

"Focusing on the posthumously published Visions of Cody (1972), I propose that for Jack Kerouac building an archive “on the run” is the only way to preserve the origin of ideas—of the creative process itself—and that this recording process is also one of his only sources of “joy”—the balm against his ingrained “mal d’archive,” what he called “that horrible homelessness all French-Canadians abroad in America have.” Further, his thirst for provenance also leads him to undertake what might be best described, for the very Catholic Kerouac, as pilgrimages to important sites of commencement; his peripatetic life is thus not solely a means of “getting away,” but a wider search for understanding himself and the friends he loves and admires, most notably Cody Pomeray (Neal Cassady). Finally, these treks to originary sites become an integral part of his method, and form, of storytelling, and thus prefigure Kerouac’s visits to library archives late in life. This final trip, as dramatized in Satori in Paris, marks the chronological end point—and the ideological exhaustion—of the entire Duluoz Legend, the name Kerouac gave to his autobiographical set of fiction. Thus, the archival vagabondage of late Kerouac in Satori in Paris is the culmination of a lifelong dedication to the creation and maintenance of a personal archive sustained as a consolation against the perennial homesickness he was never able to shake off."