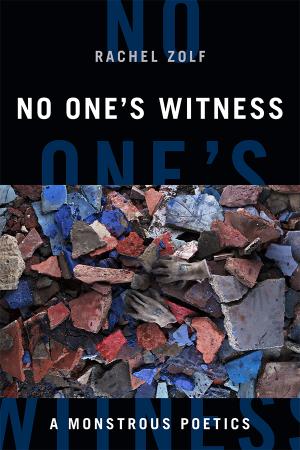 In No One's Witness Rachel Zolf activates the last three lines of a poem by Jewish Nazi holocaust survivor Paul Celan—“No one / bears witness for the / witness”—to theorize the poetics and im/possibility of witnessing. Drawing on black studies, continental philosophy, queer theory, experimental poetics, and work by several writers and artists, Zolf asks what it means to witness from the excessive, incalculable position of No One. In a fragmentary and recursive style that enacts the monstrous speech it pursues, No One's Witness demonstrates the necessity of confronting the Nazi holocaust in relation to transatlantic slavery and its afterlives. Thinking along with black feminist theory's notions of entangled swarm, field, plenum, chorus, No One's Witness interrogates the limits and thresholds of witnessing, its dangerous perhaps. No One operates outside the bounds of the sovereign individual, hauntologically informed by the fleshly no-thingness that has been historically ascribed to blackness and that blackness enacts within, apposite to, and beyond the No One. No One bears witness to becomings beyond comprehension, making and unmaking monstrous forms of entangled future anterior life.

“Drawing on a powerful critical network of ideas and a refreshing juxtaposition of theorists, Rachel Zolf rethinks the critical underpinnings of the examinations of race, history, society, culture, ontology, and ideas of witnessing. As a critical-theoretical intervention and a lyric prose artifact, No One’s Witness will appeal not only to theorists and critics, but also to poets, professors, and students.” — John Keene, author of Counternarratives: Stories and Novellas

“Renewing the poetics of survival and witnessing, Rachel Zolf asks what it means to witness as No One, where No One is less a position than a form or mode of responsiveness that emerges in the continuing aftermath of annihilation. This No One is not one, yet it offers here a way of bearing witness in forms both monstrous and rife with possible futures. In this book poetics is the interruptive work of philosophy and poetry taken together. No One's Witness shows in brilliant and moving ways how language must change to come close to registering the living aftermath of destruction.” — Judith Butler, author of The Force of Nonviolence: An Ethico-Political Bind