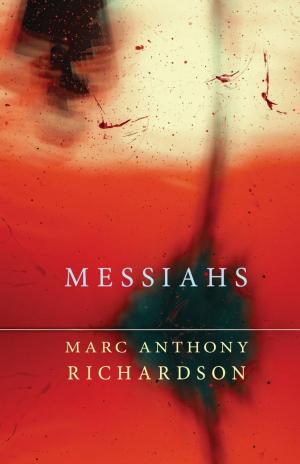 A fiercely ecstatic tale of betrayal and self-sacrifice

Messiahs centers on two nameless lovers, a woman of east Asian descent and a former state prisoner, a black man who volunteered incarceration on behalf of his falsely convicted nephew, yet was “exonerated” after more than two years on death row. In this dystopian America, one can assume a relative’s capital sentence as an act of holy reform—“the proxy initiative,” patterned after the Passion.

The lovers begin their affair by exchanging letters, and after his release, they withdraw to a remote cabin during a torrential winter, haunted by their respective past tragedies. Savagely ostracized by her family for years, the woman is asked by her mother to take the proxy initiative for her brother—creating a conflict she cannot bear to share with her lover. Comprised of ten poetic paragraphs, Messiahs’ rigorous style and sustained intensity equals agony and ecstasy.

​"Marc Anthony Richardson's novel has a nightmare impact, a gathering heartbreak...Messiahs often upsets expectation, using its imaginative premise as more than a platform for critiquing our broken justice system....typical of the entire unfolding tapestry, a marvel of close stitching, with glimmers you feel in your spine."
—John Domini, reviewer for The Brooklyn Rail and author of The Archeology of a Good Ragù

“Messiahs is a fever dream of storytelling. It explores racism and interracial conflict, the deadly prison industrial complex, climate emergency, social death, and more in prose that unfurls like waves of sound. Bleak, though not without hope, challenging, though with numerous rewards along the way, innovative from start to finish, Messiahs is a marvel.”
—John Keene, MacArthur Fellow, and author of Annotations and Counternarratives

“In Messiahs, Marc Anthony Richardson gives us an innovative, intelligent, and insightful take on several American obsessions, including punishment, incarceration, and the death penalty. As much as this layered narrative presents a warning about things to come, it also offers a profound examination of rebirth, redemption, second-acts. All in all an unnerving, uncanny, and challenging read on many levels but well worth the effort.”
—Jeffery Renard Allen, Guggenheim Fellow, and author of Rails Under My Back and Song of the Shank