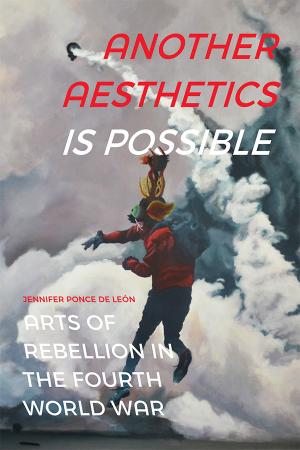 Another Aesthetics Is Possible

Arts of Rebellion in the Fourth World War

In Another Aesthetics Is Possible Jennifer Ponce de León examines the roles that art can play in the collective labor of creating and defending another social reality. Focusing on artists and art collectives in Argentina, Mexico, and the United States, Ponce de León shows how experimental practices in the visual, literary, and performing arts have been influenced by and articulated with leftist movements and popular uprisings that have repudiated neoliberal capitalism and its violence. Whether enacting solidarity with Zapatista communities through an alternate reality game or using surrealist street theater to amplify the more radical strands of Argentina's human rights movement, these artists fuse their praxis with forms of political mobilization from direct-action tactics to economic resistance. Advancing an innovative transnational and transdisciplinary framework of analysis, Ponce de León proposes a materialist understanding of art and politics that brings to the fore the power of aesthetics to both compose and make visible a world beyond capitalism.