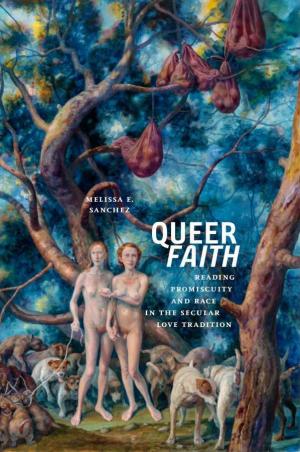 Reading Promiscuity and Race in the Secular Love Tradition

Uncovers the queer logics of premodern religious and secular texts

Putting premodern theology and poetry in dialogue with contemporary theory and politics, Queer Faith reassess the commonplace view that a modern veneration of sexual monogamy and fidelity finds
its roots in Protestant thought. What if this narrative of “history and tradition” suppresses the queerness of its own foundational texts? Queer Faith examines key works of the prehistory of monogamy—from Paul to Luther, Petrarch to Shakespeare—to show that writing assumed to promote fidelity in fact articulates the affordances of promiscuity, both in its sexual sense and in its larger designation of all that is impure and disorderly. At the same time, Melissa E. Sanchez resists casting promiscuity as the ethical, queer alternative to monogamy, tracing instead how ideals of sexual liberation are themselves attached to nascent racial and economic hierarchies. Because discourses of fidelity and freedom are also discourses on racial and sexual positionality, excavating the complex historical entanglement of faith, race, and eroticism is urgent to contemporary
queer debates about normativity, agency, and relationality.

Deliberately unfaithful to disciplinary norms and national boundaries, this book assembles new conceptual frameworks at the juncture of secular and religious thought, political and aesthetic form. It thereby enlarges the contexts, objects, and authorized genealogies of queer scholarship. Retracing a history that did not have to be, Sanchez recovers writing that inscribes radical queer insights at the premodern foundations of conservative and heteronormative culture.