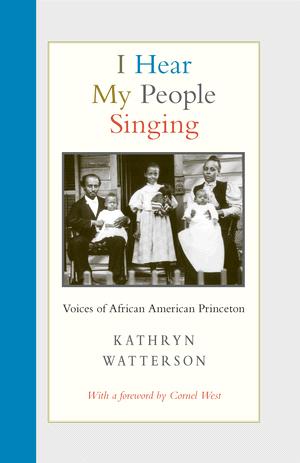 I Hear My People Singing

A vivid history of life in Princeton, New Jersey, told through the voices of its African American residents

I Hear My People Singing shines a light on a small but historic black neighborhood at the heart of one of the most elite and world-renowned Ivy-League towns—Princeton, New Jersey. The vivid first-person accounts of more than fifty black residents detail aspects of their lives throughout the twentieth century. Their stories show that the roots of Princeton’s African American community are as deeply intertwined with the town and university as they are with the history of the United States, the legacies of slavery, and the nation’s current conversations on race.

Drawn from an oral history collaboration with residents of the Witherspoon-Jackson neighborhood, Princeton undergraduates, and their professor, Kathryn Watterson, neighbors speak candidly about Jim Crow segregation, the consequences of school integration, World Wars I and II, and the struggles for equal opportunities and civil rights. Despite three centuries of legal and economic obstacles, African American residents have created a flourishing, ethical, and humane neighborhood in which to raise their children, care for the sick and elderly, worship, stand their ground, and celebrate life. Abundantly filled with photographs, I Hear My People Singing personalizes the injustices faced by generations of black Princetonians—including the famed Paul Robeson—and highlights the community’s remarkable achievements. The introductions to each chapter provide historical context, as does the book’s foreword by noted scholar, theologian, and activist Cornel West.

An intimate testament of the black community’s resilience and ingenuity, I Hear My People Singing adds a never-before-compiled account of poignant black experience to an American narrative that needs to be heard now more than ever.