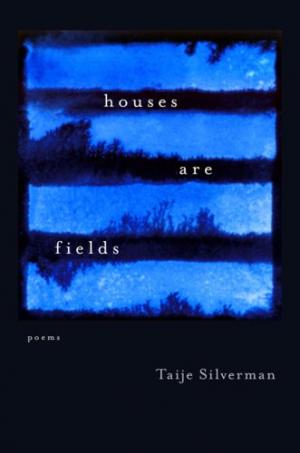 Taije Silverman’s debut collection chronicles her family’s devotion and dissolution through the death of her mother. Ranging in style from measured narratives to fragmented lyrics that convey the ambiguity of loss, these poems both arc into the past and question the possibility of the future, exploring the ways in which memory at once sustains and fails love. Ultimately the poems are elegies not only to one beloved mother, but to the large and diffusive presences of Keats, Mandelstam, a concentration camp near Prague, a coming-of-age on a Greek island, and the nearly traceless particles of neutrinos that—as with each detail toward which the poet lends her attention—become precious as the mother departs from her position at the center of the world. Furious, redemptive, and deeply immediate, Houses are Fields is a beautifully moving first book.

“The poems … are heartbreaking in their beauty, the depths of emotion seemingly endless—yet elegantly contained in the poet’s precise language, her haunting imagery. Silverman confronts loss with remarkable tenderness, and the delight in reading these poems—in spite of their landscape of grief—calls to mind Percy Bysshe Shelley’s notion that ‘Poetry is the record of the best and happiest moments of the happiest and best minds.’ These poems know joy as well as sorrow, and the juxtaposition of the two—deftly handled—makes this book one of the most beautiful I’ve read in years.”

“Houses Are Fields is a book of attentions, a passionate, searing, and inconsolable testament.”

“The drama of these poems is breathtaking.”

“Most extended elegies become, in the end, postmortem celebrations of life over death. But because Silverman’s first book is so driven in its narrative momentum, so thorough in its lyric fervor, and so invested in the fundamental emotional realities of her mother’s long death from brain cancer, Houses Are Fieldsreverses our expectations: it makes beautiful and vital the life in this death by mastering the detail and elevating the vision of what makes dying so graphic as a slow, daily, enervating process of palpable disappearance. The grief here is far less about mourning than witnessing, the witness herself giving witness. How rare to have such suffering given the value it has so precisely earned.”