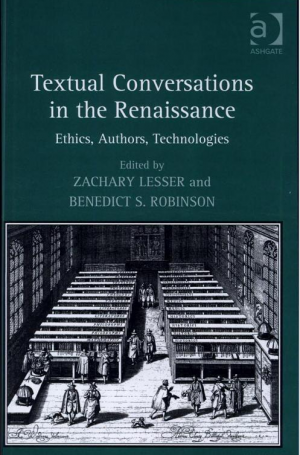 Textual Conversations in the Renaissance

"Conversation is the beginning and end of knowledge," wrote Stephano Guazzo in his Civil Conversation. Like Guazzo's, this is a book dedicated to the Renaissance concept of conversation, a concept that functioned simultaneously as a privileged literary and rhetorical form (the dialogue), an intellectual and artistic program (the humanists' interactions with ancient texts), and a political possibility (the king's council, or the republican concept of mixed government). In its varieties of knowledge production, the Renaissance was centrally concerned with debate and dialogue, not only among scholars, but also, and perhaps more importantly, among and with texts. Renaissance reading practices were active and engaged: such conversations with texts were meant to prepare the mind for political and civic life, and the political itself was conceived as fundamentally conversational. The humanist idea of conversation thus theorized the relationships among literature, politics, and history; it was one of the first modern attempts to locate cultural production within a specific historical and political context. The essays in this collection investigate the varied ways in which the Renaissance incorporated textual conversation and dialogue into its literary, political, juridical, religious, and social practices. They focus on the importance of conversation to early modern understandings of ethics; on literary history itself as an ongoing authorial conversation; and on the material and textual technologies that enabled early modern conversations.