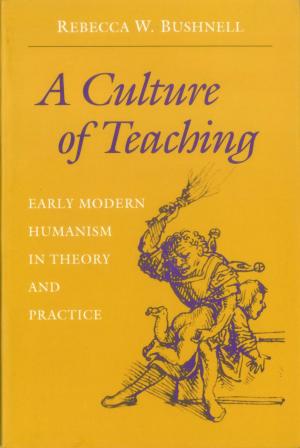 A Culture of Teaching

This provocative account of humanist education in early modern England relates the history of humanism to debates about its current status. The humanism Rebecca W. Bushnell traces through sixteenth-century sources emerges as distinct from humanist doctrines espoused today. And yet, in the conflicts faced by early humanists, Bushnell identifies the origins of contemporary educational notions and practices, including approaches to discipline, gender and class differences, reading and interpretation, canon formation, and the transmission of tradition. Renaissance texts depicting the schoolroom reveal a pedagogy fraught with tensions - between freedom and mastery, flexibility and rigid control, a passion for variety and a fear of excess. Bushnell describes this oscillation between opposites through debates over corporal punishment, in which the schoolmaster appears either as all-powerful or as the insignificant servant of authority. In pedagogical manuals strongly reminiscent of gardening guides, the scholar was seen as both a pliant vine and a force of nature. Bushnell perceives a similar ambivalence in early humanist attitudes toward reading and the creation of a literary canon. Moving outside the classroom walls, she considers the contradictory politics of appeals to tradition and invention in early debates over imitating the classics. In each instance, she indicates how, at the end of the sixteenth century, this balance began to tilt toward authoritarianism, selectivity, and discrimination.