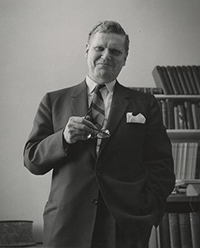 Dr. Hornberger joined the University of Pennsylvania in 1960 as a Professor of English. He served as chair of the graduate group in English, 1965-1967 and acting chair of the Department of English, 1968-1969. He was appointed John Welsh Centennial Professor of History and English Literature in 1968 and upon his retirement in 1974 became John Welsh Centennial Professor Emeritus of History and English Literature.

He was the author of Scientific Thought in the American Colleges, 1638-1800 (1945) and many scholarly journal articles. He was editor of Mark Twain’s Letters to Will Bowen (1941), William Cullen Bryant and Isaac Henderson (1950), and Literature of the United States (1966).

Theodore Hornberger died on March 14, 1975 in Minneapolis, Minnesota where he was a visiting Professor of English at the University of Minnesota. He was survived by his wife, Marian Welles Hornberger, and two daughters, Jean Alice (Mrs. Roland Cleveland) and Katharine Watson (Mrs. Allen Denenberg).

Mary B. Guthrow "Tales of the Revolution: The Revolutionary War in American Fiction Before 1860"

Jane E. Gulick "The Moral Vision of William Dean Howells and Its Effect Upon His Major Novels"
Louis Oldani "A Study of Dreiser's The "Genius""
David Parker "The Application of Humiliation: Ramist Logic and the Rise of Preparationism in New England"
John W Tallon "The Aesthetic Attitudes of Jonathan Edwards"

Paul A Cruser "The Ficiton of Flannery O'Conner"

Delmont F. Fleming "Humor in the Works of Thomas Wolfe"