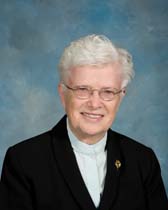 Sister Agnes Marie Gunn, a resident at Saint Joseph Villa since 2011, died there on October 19, 2018. Her funeral followed on October 24.

Sister Agnes entered the Congregation of Sisters of Saint Joseph in 1949, and received the name Sister Agnes David. She described her vocation as something that really was not her decision, but a response to God’s quiet yet persistent call.

Agnes’ life was filled with diverse, enriching experiences, moving in ministry from city, suburban, inner city, Jersey shore and the nation’s capital. In her joyful response to apostolic life, Agnes’ tender warmth and welcoming presence were blessings to all. As liaison for Sisters Education in the congregation, Agnes encouraged many sisters to stretch in their pursuit of advanced studies that would meet emerging needs.

Agnes enjoyed her years as teacher at Hallahan and West Catholic High Schools, and Chestnut Hill College. During these years, she earned Master’s  and  Doctoral Degrees in English, both from the University of Pennsylvania. She served on the General Council of the Sisters of Saint Joseph, president of the United States Federation of the Sisters of Saint Joseph, Delegate for Religious in the Archdiocese of Washington, Director of Vocations in the Archdiocese of Philadelphia, and Pastoral Immigration counselor and Delegate for Religious in the Trenton diocese. A highlight of Agnes’ long ministry was the task she undertook of editing the SSJ Constitutions. This sacred duty of editing brought into play a large and talented committee that worked on diverse pieces of this revision.

Sister Agnes was welcoming and respectful toward traumatized women refugees from Liberia. Rooted deeply in her vocation, she was nourished by daily prayer and Eucharitst, raidiating God’s love to all. Bishops and Religious with whom she worked throughout her ministry were recipients of her goodness and wisdom.

In her own words, quoting St. John of the Cross, ‘in the evening of this life, you will be judged on love.’ ”The call of the gospel in its fullness growing daily ever stronger…all have made me what I am today, a simple, grateful woman who has never lost the wonder of her call to be a Sister of Saint Joseph.”