Professor of English and Comparative Philology 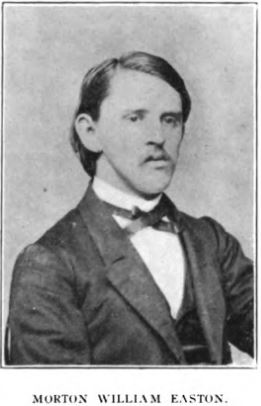 Morton William Easton, Ph.D., was born in Hartford, Connecticut, August 18, 1841, son of Oliver Hastings and Emeline Maria (Brace) Easton.  He is descended from Joseph Easton, one of the first settlers of Hartford, and Stephen Brace, who arrived in that Colony about the year 1660.  He attended the public schools of Hartford graduating from the Classical Department of the High School in 1859, and took his Bachelor's degree at Yale in 1863.  Entering the Medical Department of Columbia he was graduated a Doctor of Medicine in 1866.  He then went abroad for further study and was for some time a student at the University of Vienna.  Instead of adopting the profession of medicine he returned to Yale as a graduate student, taking special courses in Philology, Greek and Sanskrit, receiving the degree of Doctor of Philology in 1872.  Soon after, he accepted the Chairs of Ancient Languages and, later, of Comparative Philology at the University of Tennessee where he remained until 1880, in which year he was called to the University of Pennsylvania as instructor in French, was subsequently made Adjunct Professor of Greek and for some years has held the Professorship of English and Comparative Philology.  On June 15, 1875, Dr. Easton married Maria Stille Burton, of Philadelphia.  They have had four children, and their first child, Edith Burton, who was born May 10, 1876, died October 3 of the same year.  The others are : Buron Scott, born December 4, 1877; William Hastings, born February 22, 1881 ; and Ethel Stille Easton, born April 23, 1883.