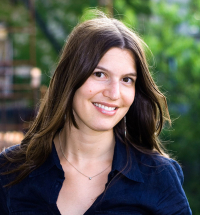 Courtney Zoffness graduated from Penn with a BA cum laude in English, where she founded and ran the "Speakeasy" open mic series at the Kelly Writers House. A former journalist who served as Managing Editor of the United-Nations-sponsored Earth Times, Zoffness went on to receive two graduate degrees in fiction: an MA from the Writing Seminars at Johns Hopkins University, where she held a Teaching Fellowship, and an MFA in fiction from the University of Arizona, where she received the Minnie M. Torrance Scholarship in Creative Writing and the UA Foundation Award. Her short fiction has appeared in several journals and anthologies, including Washington Square, Tampa Review, Saint Ann’s Review, and the Fish Prize Stories’, an international contest in which she placed third. She’s also published essays and criticism in Ladies’ Home Journal, Our Town, the New York Metro, and elsewhere. She’s held residency fellowships at the Vermont Studio Center and the Bread Loaf Writers’ Conference. She moonlights as a ghostwriter.