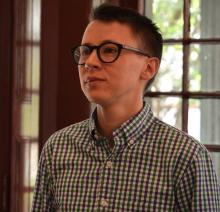 Davy Knittle (English) has been called an intellectual “force” across multiple fields of study ranging from poetics and urban studies to queer theory and trans studies. Davy’s doctoral thesis, “Queer With the City: Deviance and the Politics of Urban Change,” uses experimental poetry to uncover the ways in which post-war urban renewal used a “logic of deviance” to not only marginalize working-class residents and communities of color but also to push sexually “deviant” subjects away from urban spaces. In addition to Davy’s accomplishments as an award-winning poet and published scholar, he is credited as a “vital” and “galvanizing” figure in the Penn community, passionate about activism and volunteerism. He has helped organize a number of literary events for the Kelly’s Writer’s House, taught public writing workshops, and was a key contributor on the Penn Trans Literacy Project.