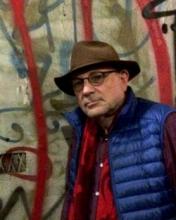 Charles Bernstein, Professor of English and Comparative Literature, has been named the winner of the 2019 Bollingen Prize for American Poetry. The Bollingen Prize, established by Paul Mellon in 1949, is awarded biennially by the Yale University Library through the Beinecke Rare Book and Manuscript Library to an American poet for the best book published during the previous two years or for lifetime achievement in poetry. The prize includes a cash award of $165,000.

Bernstein is the 51st poet to be honored with the award. He is the author of numerous books of poetry, including Near/Miss, published last year, Recalculating, and All the Whiskey in Heaven: Selected Poems, among many others. “As poet, editor, critic, translator, and educator, Charles Bernstein’s decades-long commitment to the community of arts and letters reflects a profound understanding of the importance of language in the business of culture-making,” the three-member prize judging committee said. “His extraordinary new collection of poems, Near/Miss, finds Bernstein deploying his characteristically incisive satire and sharp wit to dismantle the clichés driving public speech.  Yet, in moments treading close to heartbreak, the work sounds the depths where the public poet must find the words for private grief. Bernstein’s work  interrogates, restlessly, seemingly word by word, language and its performative nature.”