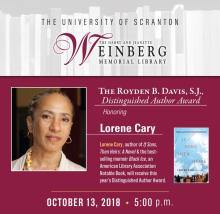 Philadelphia native, acclaimed writer, and senior lecturer in the Department of English, Lorene Cary received the 2018 Royden B. Davis, S.J., Distinguished Author Award from The University of Scranton’s Friends of the Weinberg Memorial Library on Saturday, Oct. 13, 2018.

Professor Cary’s books are well known for their thoughtful and intelligent examination of the African-American experience, beginning with her best-selling memoir, Black Ice, an American Library Association Book for 1991 that continues to be taught in high schools and colleges today. Her 2011 novel, If Sons, Then Heirs, is a contemporary love story that also explores the corrosive racial history that haunts its main characters. The book was called “an absorbing and moving tale” by Publishers Weekly and “a powerful take on family, history” by The Philadelphia Tribune. Cary’s other books include: The Price of a Child, a 1995 novel chosen as the first One Book, One Philadelphia selection; Pride, a contemporary novel; and FREE! Great Escapes on the Underground Railroad, a collection of true-life stories for young readers. Meanwhile, Cary’s essays have appeared in publications like Newsweek, Time, Essence and O Magazine.

In 1998, Cary founded Art Sanctuary to create unique programs for African-American artists, performers and writers in Philadelphia. The programs have drawn up to 1,500 participants a year. In addition, she served on Philadelphia’s School Reform Commission from October 2011 to January 2013.

Named in honor of the late Rev. Royden B. Davis, S.J., who served in many roles at the University and as rector of the Jesuit Community, the Distinguished Author Award was established in 1997. The Friends of the Weinberg Memorial Library envisioned the series as a way to honor notable fiction and non-fiction authors, and to give them the opportunity to share their literary pursuits and impressions with Northeastern Pennsylvanians. Proceeds from the event benefit the Friends of the Library Endowment Fund, which supports special gifts for the Weinberg Library collections and services.