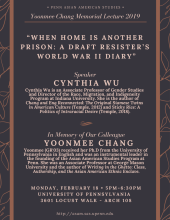 Cindy Wu is an Associate Professor of Gender Studies and Director of the Race, Migration, and Indigeneity Program at Indiana University. She is the author of Chang and Eng Reconnected: The Original Siamese Twins in American Culture (Temple, 2012) and Sticky Rice: A Politics of Intraracial Desire (Temple, 2018).

Yoonmee Chang (November 2, 1970 – January 18, 2018) was born in Seoul, South Korea, and grew up in New York. She received her Ph.D. in English from the University of Pennsylvania in 2003 with a specialization in Asian American diasporic literature and culture. As a graduate student at Penn, she was an instrumental leader in the founding of the Asian American Studies Program. Yoonmee, author of the critically acclaimed book, Writing the Ghetto: Class, Authorship, and the Asian American Ethnic Enclave, taught at Indiana University in Bloomington, Indiana before becoming an Associate Professor at George Mason University from 2005 until her death in 2018. The Yoonmee Chang Memorial Lecture will host a distinguished speaker annually in honor of her memory and her work.