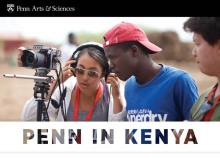 
Free and open to the public. To register for this event, please click here.

In the summer of 2017, eight Penn undergraduates, two teaching assistants, and Professor Peter Decherney traveled to the Kakuma refugee camp and Kalobeyei settlement in Northwest Kenya, near the border with South Sudan. With funding from a School of Arts and Sciences grant, Making a Difference in Diverse Communities grant, participants in the Penn in Kenya program  collaborated with refugees who had been trained in filmmaking by FilmAid, a nonprofit organization. Together, they made a series of short documentary films and a virtual reality film documenting the United Nations’ new approach to responding to the refugee crisis in Africa. Come to Perry World House to learn about the program, the larger issues the films addressed and to see the work the students created.

Introductory remarks by: Steven J. Fluharty, Dean of the School of Arts and Sciences and Thomas S. Gates, Jr. Professor of Psychology, Pharmacology, and Neuroscience

A Discussion of the Penn in Kenya Program and the global refugee crisis with:

Sponsored by the Perry World House, Cinema and Media Studies, Making a Difference in Diverse Communities, Penn FilmAid, and PURE.