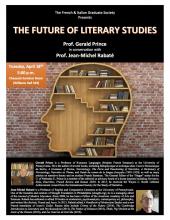 
The French and Italian Graduate Society (FIGS) would like to remind you that you are cordially invited to attend its last talk of the semester entitled "THE FUTURE OF LITERARY STUDIES. Prof. Gerald Prince in conversation with Prof. Jean-Michel Rabaté."
The talk will be held today, Tuesday, April 18th, at 5:00 p.m., in Cherpack Seminar Room, Williams Hall 543. (Please see poster in attachment.)
FYI: Talk, discussion, and questions will be conducted in English.
Prof. Gerald Prince (Romance Languages, University of Pennsylvania) will present and discuss his article "Talking French" recently published in the PMLA (http://www.mlajournals.org/doi/abs/10.1632/pmla.2016.131.5.1489), in conversation with Prof. Jean-Michel Rabaté (English and Comparative Literature, University of Pennsylvania).

Gerald Prince is a Professor of Romance Languages (Modern French literature) at the University of Pennsylvania. He is the author of several books, including Métaphysique et technique dans l’œuvre Romanesque de Sartre, A Grammar of Stories, Narratology: The Form and Functioning of Narrative, A Dictionary of Narratology, Narrative as Theme, and Guide du roman de la langue française (1901-1950), as well as many articles on narrative theory and on modern French literature. The General Editor of the “Stages” series for the U. of Nebraska P., Prince is a member of the editorial or advisory board of a dozen journals including Narrative, Style, Diacritics, French Review and Roman 20/50. In 2013, he received the Wayne C. Booth Lifetime Achievement Award from the International Society for the Study of Narrative.
Jean-Michel Rabaté is a Professor of English and Comparative Literature at the University of Pennsylvania. One of the founders and curators of Slought Foundation in Philadelphia (slought.org<http://slought.org/>), he is a managing editor of the Journal of Modern Literature. Since 2008, he has been a Fellow of the American Academy of Arts and Sciences. Rabaté has authored or edited 38 books on modernism, psychoanalysis, contemporary art, philosophy, and writers like Beckett, Pound and Joyce. In 2013, Rabaté edited A Handbook of Modernism Studies and a new French translation of Joyce’s Exiles. Recent titles include Crimes of the Future (2014), The Cambridge Introduction to Literature and Psychoanalysis (2014), The Pathos of Distance (2016), Think, Pig! Beckett at the Limit of the Human (2016), and Les Guerres de Derrida (2016).
For further information about FIGS, please visit our website: http://upennfrenchitalian.weebly.com/
We look forward to seeing you this afternoon!
The FIGS Executive Board