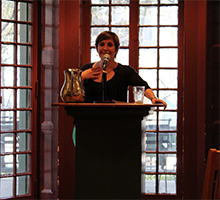 
JOAN WICKERSHAM's most recent book, The News from Spain (Knopf) was named one of the year's best fiction picks by National Public Radio, Kirkus Reviews and The San Francisco Chronicle. Her memoir The Suicide Index (Houghton Mifflin Harcourt) was a National Book Award finalist. Her work has appeared in One Story, Agni, Glimmer Train, Ploughshares, The Best American Short Stories, The Best American Nonrequired Reading, and many other publications. Joan has been a regular op-ed columnist for The Boston Globe and her pieces have run in The International Herald Tribune and on NPR. She has a BA in art history from Yale, has taught writing at Emerson and Harvard, and currently teaches in Bennington's MFA program.

watch: a video recording of this event via KWH-TV

listen: to an audio recording of this event