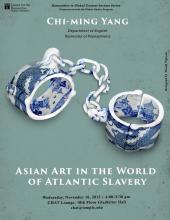 Asian Art in the World of Atlantic Slavery


ABSTRACT of Chi-ming Yang's talk:  By the mid-1600s, the demand for Chinese and Japanese luxury goods was shaping Western tastes across the Atlantic world, and the drive to replicate these commodities spurred numerous innovations in the arts and sciences, in particular, techniques for coloring and coating surfaces. The marvelous, glossy veneers of China trade porcelain and lacquer also provided new media for portraying indigenous peoples of the Americas. Fantastical chinoiserie designs often juxtaposed ethnographic details from travel accounts ranging from Florida to Brazil, rendering consumable the very idea of the global and aestheticizing the violence endemic to long-distance trade. By tracking the circulation of images of native peoples, plants, and animals between and across different media, we can better understand how an eighteenth-century aesthetics of race relied upon new technologies of representing and understanding a globalized world.

BIO:  Chi-ming Yang is Associate Professor of English at University of Pennsylvania. She specializes in the literary and visual culture of race and empire, with a focus on East-West cultural exchanges stretching from the early modern period to the 18th century, and up to the contemporary moment. Her book, Performing China: Virtue, Commerce, and Orientalism in Eighteenth-century England, 1660-1760 (Johns Hopkins University Press, 2011), is a study of early modern Orientalism. This talk draws from her new work on race, chinoiserie, transatlantic slavery, and the cultural impact of global flows of silver between Latin America and East Asia.