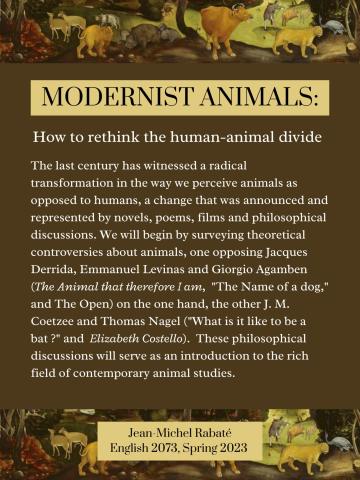 Modernist Animals: How to rethink the human-animal divide

The last century has witnessed a radical transformation in the way we perceive animals as opposed to humans, a change that was announced and represented by novels, poems, films, and philosophical discussions. We will begin by surveying theoretical controversies about animals, one opposing Jacques Derrida, Emmanuel Levinas, and Giorgio Agamben (The Animal that therefore I am, « The Name of a dog »,  and The Open) on the one hand, the other J. M. Coetzee and Thomas Nagel (« What is is like to be a bat ? » and  Elizabeth Costello).These philosophical discussions will serve as an introduction to the rich field of contemporary animal studies. We will limit our examples to works from the 20th and 21st centuries, a corpus that is nevertheless extremely varied, ranging from the Japanese classic I Am a Cat by Natsume Sōseki to animal poems by Marianne Moore, Elizabeth Bishop, and Ted Hughes, and stories by Franz Kafka, Virginia Woolf, and George Langelaan. Films will be discussed, including Alfred Hitchcock’s The Birds, Werner Herzog’s Grizzly Man, David Cronenberg’s The Fly, and Yorgos Lanthimos’s The Lobster, along with Mick Jackson’s biopic on Temple Grandin and the animated feature My Dog Tulip. We will conclude with imaginary animals sketched by Jorge Luis Borges in his book of fantastic zoology.