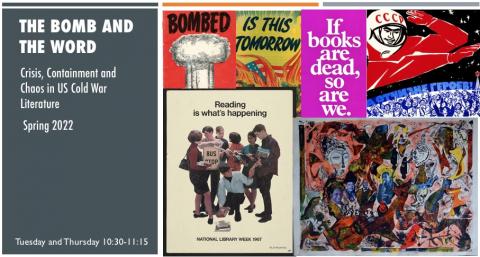 The Bomb and the Word: Crisis, Containment and Chaos in US Cold War Literature

In the United States, the years of the Cold War (roughly 1946-1989) were marked by existential anxiety over global annihilation, panic about the threat of communism abroad and at home, demands for racial justice and redefinition of gender norms. Alongside national and foreign policy, literature played a powerful role both in defining and resisting “containment” of Communist ideology around the world and of liberatory forces in the United States.  This course will consider the power literature had during this period and the ways in which that power drove authors to rethink their own approach to production as well as the ways in which literature came to serve as propaganda.  We will consider how ideas about freedom in the West shaped literary production as the state coopted literature as a form of competition between the two superpowers.

Beginning with texts and films that represented American’s anxieties and fears about Communism and the atomic bomb, this course will show the ways in which the sense of crisis and anxiety drove literary experimentation and increasingly personal forms of poetry and prose.  This course will examine works like Ralph Ellison’s Invisible Man, John Okada’s No No Boy and Sylvia Plath’s The Bell Jar to begin to see how freedom of expression reflected and resisted social and state efforts to contain demands for freedom from women and racial minorities. Finally, the course will end by looking at a range of experimental novels which worked to defy assumptions about cultural superiority and freedom of expression including Ishmael Reed’s Mumbo Jumbo and Leslie Marmon Silko’s Ceremony.

Students in this class will read literary texts, watch movies and television shows alongside reading scholarly texts to put the course material into context.  Class time will be spent in discussion and students will be expected to come to class ready to talk about both the text at hand and what they are finding in their own research.  Each week students will shape discussion by bringing artifacts from the period into conversation with the text in short written connection papers (500-1000 words).  Throughout the semester, students will work on expanding those artifact papers into a multi-media Cold War cultural topic of their choice.