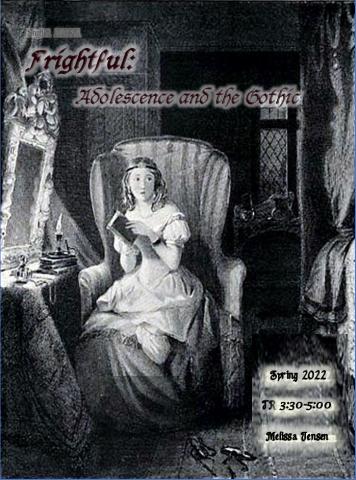 Long before we had Anna Dressed in Blood, we had Carmilla dressed in her Victorian vampire finery and young Mrs. de Winter dressed in…well, tweed, probably. It was England. The point is that the Gothic novel, with its young adult protagonist and angsty atmosphere, goes back more than two hundred years, overflowing with haunted hallways, dastardly villains, damsels in distress (and, sometimes, body armor), all entrancing stand-ins for the horrors that lurk in our own psyches.

In this course, we will study classic and contemporary Gothic texts and films, along with supplemental commentary, to determine what exactly Gothic means. Where adolescence fits into the equation. And why, as a fuzzily-boundaried genre, it has been unflaggingly best-selling, lauded and derided in equal measure, for nearly three centuries.

There will be lots of reading, some critical writing, and plenty of opportunities to go creative in both answering the questions above and deciding what the Gothic will be for the remainder of our century. Assigments include regular outside-the-box mini-exercises, a short critical essay, a presentation on your Gothic passion, and a final project of either critical analysis of your term study or a creative representation of where that study has taken you. Regular participation in class discussions is crucial.

Along with those referenced above, some of the materials we might be using:

The Castle of Otranto, Horace Walpole

White is for Witching, Helen Oyeyemi

Fairy tales by Charles Perrault, the Grimms, and Angela Carter

Get Out, Jordan Peele

Scooby Doo, Where Are You? Joseph Barbera and William Hannah

Enter if you dare.