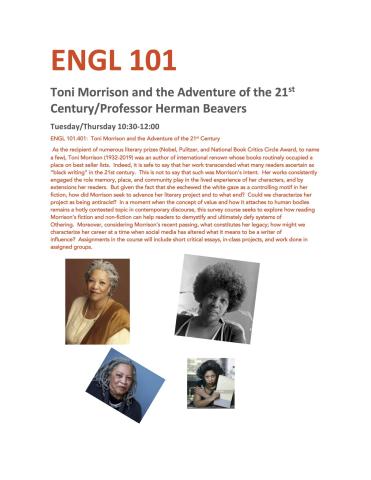 Toni Morrison and the Adventure of the 21st-Century

As the recipient of numerous literary prizes (Nobel, Pulitzer, and National Book Critics Circle Award, to name a few), Toni Morrison (1932-2019) was an author of international renown whose books routinely occupied a place on best seller lists.  Indeed, it is safe to say that her work transcended what many readers ascertain as “black writing” in the 21st century.  This is not to say that such was Morrison’s intent.  Her works consistently engaged the role memory, place, and community play in the lived experience of her characters, and by extensions her readers.  But given the fact that she eschewed the white gaze as a controlling motif in her fiction, how did Morrison seek to advance her literary project and to what end?  Could we characterize her project as being antiracist?  In a moment when the concept of value and how it attaches to human bodies remains a hotly contested topic in contemporary discourse, this survey course seeks to explore how reading Morrison’s fiction and non-fiction can help readers to demystify and ultimately defy systems of Othering.  Moreover, considering Morrison’s recent passing, what constitutes her legacy; how might we characterize her career at a time when social media has altered what it means to be a writer of influence?  Assignments in the course will include short critical essays, in-class projects, and work done in assigned groups.