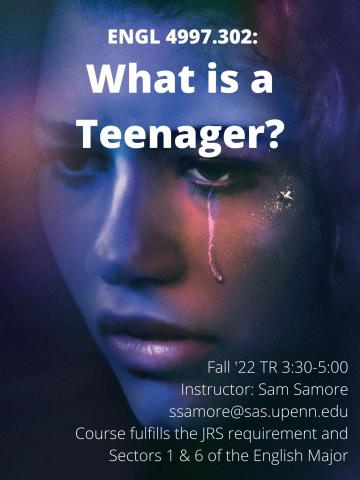 JRS: What is a Teenager?

What is a teenager? The answer to this question might seem self-evident: anyone aged thirteen to nineteen. Our cultural obsession with teenagers, however, indicates that the category is more than just an arbitrary age range, and a cursory glance at the academic literature on the subject suggests that the definition of a teenager is far from obvious. This course will dive headfirst into this difficult question, covering various theories of teenage-hood from multiple disciplinary perspectives, including media studies, psychoanalysis, political theory, and economic history. Units will focus on different paradigms of teenage-hood, with a focus on the US context: the teenager as radical political subject, the teenager as promiscuous sexual subject, and the teenager as economic subject. Course material will include TV episodes from series such as Gossip Girl and Euphoria, films such as La Chinoise and Thirteen, and written work by authors such as Jamal Joseph, Vladimir Nabakov, Sigmund Freud, Saidiya Hartman, and Dick Hebdige. Course requirements will include weekly readings and screenings, one short essay, one longer essay, and weekly discussion posts.

This course is a Junior Research Seminar, designed to familiarize students with research methods and current scholarship in the humanities. It will also fulfill Sectors 1 and 6 of the English major requirements.