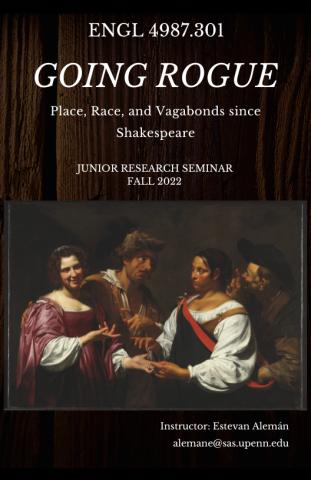 Robin Hood and his Merry Men, Victor Hugo’s Esmeralda, Charlie Chaplin’s Tramp. Such wanderers, unfettered from conventional notions of place or home, challenge ideas of stability, identity, class, law and order. It is no wonder, then, that the vagabond in literary and cultural representation has historically been characterized as a criminal, rebellious, and even heroic figure. This conflicting image of the vagabond as both endearing rogue and dangerous subversive has a long history with deep roots in the literature and culture of early modern England, the period in which Shakespeare lived and wrote. In this course we will read early modern English texts spanning plays, poems, ballads, and pamphlets depicting rogues, bandits, beggars, and so-called “gypsies,” to scrutinize the long literary tradition of the vagabond.

What is the relationship between vagabonds and conceptions of property and place? How might adventure stories about conmen and pickpocketing beggars help us question ideas about crime and policing? How does the literary treatment of Roma and other non-European peoples in this period shape perceptions of difference and race in relation to movement and migration? This seminar will explore these questions as we read early modern texts, grounding ourselves in the period, and use this foothold to trace the afterlives of rogues in later literature, film, and popular culture. Texts may include Shakespeare’s The Winter’s Tale (1611), Ben Jonson’s The Gypsies Metamorphosed (1621), Aphra Behn’s The Rover (1677), Hugo’s The Hunchback of Notre-Dame (1831), Chaplin’s The Tramp (1915), and Lee Child’s Killing Floor (1997).

The Junior Research Seminar aims to teach students the kind of research skills that literary studies demand. Requirements for the course includes a short 3-5-page paper and weekly canvas discussion posts. Throughout the semester we will develop research methods and build tools for closely reading primary and secondary texts. For the final project, students may choose between a creative project or a final scholarly research paper of 10-15 pp.