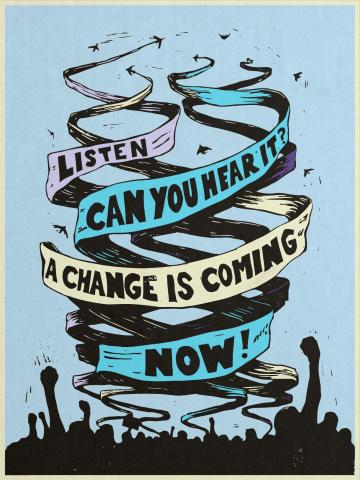 Arts of Abolition and Liberation

This interdisciplinary film & literature course will approach a 300-year history of documenting abolition through the lens of history, art, and activism.

The class will be divided roughly in half: pre-20th century, and post-20th century. We will put into dialogue the legacy of the 18th-century movement to document and abolish racial slavery, with the history of journalistic art-making and media activism. The diverse activist art forms include but are not limited to: woodcut engravings, ceramics, petitions, boycotts, manifestos, graphic novels, poetry, and documentary films.

The course will also include a number of abolitionist and activist speakers working today. Authors will include 18th and 19th-century transatlantic writers like Ottobah Cugoano and Frederick Douglass, as well as contemporary abolitionists and critics of the prison industrial complex, for example: Angela Davis, Ruth Wilson Gilmore, and Jackie Wang. Films and media will span early agitational documentaries, especially by Dziga Vertov and Joris Ivens, and will continue through the 1960s with documentaries by Alain Resnais, Santiago Alvarez, Madeline Anderson, and others.

The course will conclude with viewings of contemporary films and media centering around Black Lives Matter and other liberatory movements. Alongside works from the US we will also discuss abolition and activism from a global perspective, thus analyzing films and media from the former USSR, East Asia, South America, and beyond.

Class will be offered in a synchronous format, on Zoom between 1:30-3:30 PM (although class will likely end between 3-3:30). There will be no asynchronous recordings.

Along with academic research papers and analyses, as well as discussion board posts, the course will integrate a substantial number of creative projects, and the course will culminate in a final creative-critical project, to be completed either collaboratively between students, in conjunction with an activist organization, or on an individual basis. Readings will be primarily in electronic format although some (especially the graphic novels/comics, which aren’t available in electronic format) will need to be purchased in print form. The approximate cost of all print materials should not exceed $60. There will be no timed quizzes or exams.

By Wed eve: Write short discussion board post on Canvas

By Thurs: Attend and participate in Zoom class 1:30-3:30 (attendance required)