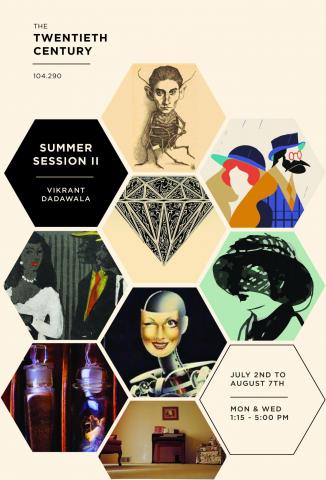 This course will offer a guided introduction to major movements and figures in twentieth-century literature, set in the context of the past century's serial revolutions in art, science, philosophy, religion, economics, and politics. Our focus will be on landmark works of prose fiction, primarily from England and America. Over five weeks of dedicated reading, we will cover the iconic historical upheavals of the twentieth century— industrial modernity, the growth of mass media, the world wars, the Cold War, migration, the civil rights movement, and globalization. Our approach to these events will be that of a specifically literary history. We will begin by reading some of the most influential works of literature from the early twentieth century, by authors like James Joyce, Virginia Woolf, and Franz Kafka. Next, we will jump across the Atlantic, and dip into the work of major American figures such as F. Scott Fitzgerald, William Faulkner, and Toni Morrison. We will conclude with a short story by Philip K. Dick, whose pulp science fiction can be read as a distillation of the dreams and nightmares of the twentieth century.

Students of all levels and backgrounds are welcome. No prior experience with university-level arts or literature courses is required. By the end of the course, students will have acquired a clear sense of the broad contours of twentieth-century literary history. They will learn how to analyze culture artifacts using a variety of methods, drawing on key concepts in literary studies: realism, modernism, postmodernism, postcolonialism etc.