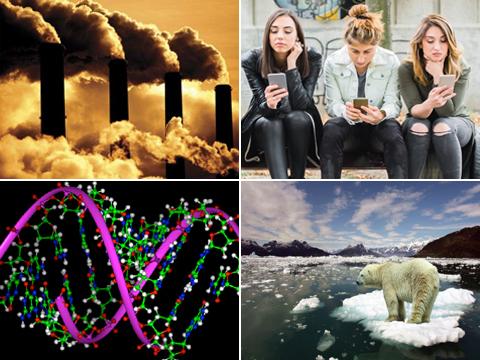 This course is a writing workshop in which we contemplate the future of our fragile planet. Each student will engage with key issues facing society in the Anthropocene—the geologic epoch in which humans have come to recognize their own decisive impact on processes such as climate and evolution that until recently have been considered phenomena of "nature." You will tackle issues that are front-page news, in formats that range from the hard-news "science" story to the op-ed and editorial, to the journalistic profile. You will develop and argue fact-based opinion pieces on such questions as: Should we let some endangered species die out? Should genetic engineers proceed with research on the editing of human germline cells? How have web and cellphone technologies altered the way we relate to one another? Is it ethical to attempt to geo-engineer the climate, and if so, at what point in the current warming cycle? More generally: can or should we ever seek to impose limits or controls on scientific research and discovery? In addition to a 2,000-word profile of a scientist or tech developer at work in his/her lab, you will write and rewrite three op-eds and a personal essay over the course of the term, and submit revised drafts in a final portfolio at the end of the term.