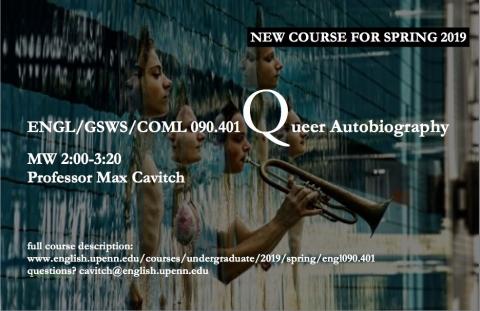 Autobiographical writing is a rich and formative part of the LGBTQ literary tradition: a vast library of queer life, storytelling, and history.  In this course, we’ll study a multinational range of LGBTQ autobiographical works from the late-nineteenth century to the present, by authors both famous and little-known, such as Oscar Wilde, Mary MacLane, Gertrude Stein, Christopher Isherwood, Roland Barthes, Leslie Feinberg, Paul Monette, Alison Bechdel, Maggie Nelson, and Rigoberto González.  As diverse and idiosyncratic as these authors are, their autobiographical narratives often share common thematic and structural elements that contribute to their collective queerness.  These elements include: the closet, coming out, prejudice and exclusion, the joys and dangers of having a body, alternative families and communities, the splendor and muckiness of non-normative sex, political solidarity, and styles of both public and private mourning.  Queer is both an old word and a new one.  It first entered English in the 14th century, when it meant “to question.”  By the 16th century, it had come to mean “strange,” “peculiar,” and “suspicious.”  The word was first linked (in a highly derogatory way) to homosexuality in the late 19th century, and it wasn’t until the late 20th century that it became a positive, affirmative term of identity among some lesbian, gay, bisexual, and transgender people—a term that disrupted stale, normative binaries of sexuality (homosexual/heterosexual) and gender (male/female).  “Queer” has come to refer to any way of being that questions (the word’s original meaning!) such binaries.  Autobiography is an appropriately “queer” genre for self-expression.  It has many forms and few rules, and it helps fluid positions of sexuality and gender take on socially shared and culturally situated sets of meanings.  It’s a genre that has been at the heart of the Western tradition for at least three millennia, and queer autobiographies are part of this tradition: adding new ways of reflecting on sexuality and gender (along with other shifting, intersecting identities) as fundamental parts of everyone’s life, new ways of understanding selfhood and subjectivity, and new ways of practicing both writing and world-building.  ~  Coursework will include class attendance and participation, several short writing assignments, and brief, straightforward quizzes (there will be no midterm or final exam).  Please note: the readings and class discussions will be full of frank talk about sexual behaviors and body parts.