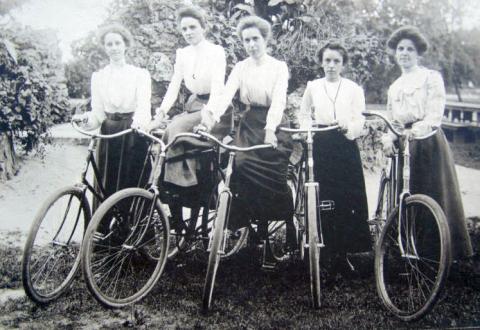 All the Single Ladies: Challenging the Marriage Plot

The song declares “you should have put a ring on it” but many of the characters in this course’s reading might say “not so fast” or “never”. Some of these women have no chance of marriage, but construct lives outside of traditional roles. Some ignore the temptations of marriage, choosing to pursue work, art, and /or love, following their own inclinations.

Our focus will be the Victorian novel, with at least two texts from the twentieth century that explore the same questions of identity, selfhood and happiness. A few of the books we’ll read:

Writing assignments include a very short response for each class, an out-of-class midterm exercise and a final paper. You’ll need to buy the printed text for each book.

[Photo courtesy of Pilcrow Magazine, from the 2015 article, "When Women Started Riding Bikes, Men Freaked Out."]