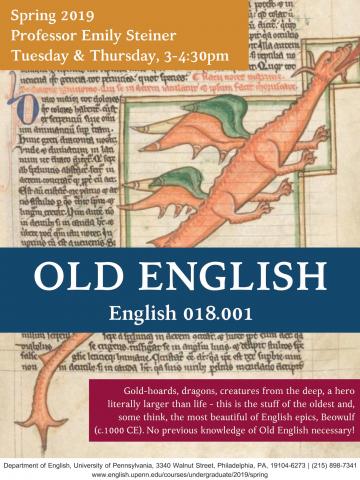 Gold-hoards, dragons, creatures from the deep, a hero literally larger than life - this is the stuff of the oldest and, some think, the most beautiful of English epics, Beowulf (c.1000 CE). In this course we will master the basics of Old English grammar and poetics in order to read parts of this classic poem in the original. We will also study the many cultures of Beowulf: 8th- to 10th-century literature, warfare, and religion; the charred 11th-century Beowulf manuscript, which includes Judith (who beheaded Holofernes), the Wonders of the East (cannibals), and Alexander the Great's Letter to Aristotle (strange encounters in India); J.R.R. Tolkein's critical and creative responses to Beowulf; modern translations and adaptations, including Seamus Heaney's translation, Benjamin Bagby's recordings, John Gardiner's novel, Grendel and Roger Zemeckis's film, Beowulf.

Assignments may include weekly translations, short quizzes, a final paper, and participation in a final performance at the Kelly Writers House called Old English Live!