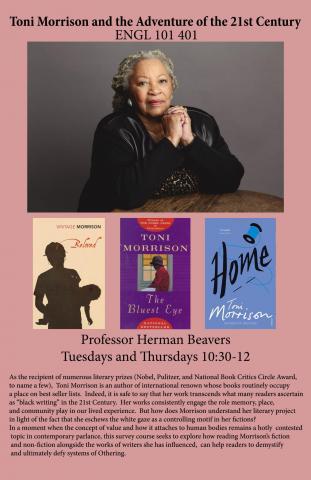 Toni Morrison and the Adventure of the 21st Century

As the recipient of numerous literary prizes (Nobel, Pulitzer, and National Book Critics Circle Award, to name a few), Toni Morrison is an author of international renown whose books routinely occupy a place on best seller lists.  Indeed, it is safe to say that her work transcends what many readers ascertain as “black writing” in the 21st Century.  Her works consistently engage the role memory, place, and community play in our lived experience.  But how does Morrison understand her literary project in light of the fact that she eschews the white gaze as a controlling motif in her fictions?   In a moment when the concept of value and how it attaches to human bodies remains a hotly contested topic in contemporary parlance, this survey course seeks to explore how reading Morrison’s fiction and non-fiction alongside the works of writers she has influenced, can help readers to demystify and ultimately defy systems of Othering.