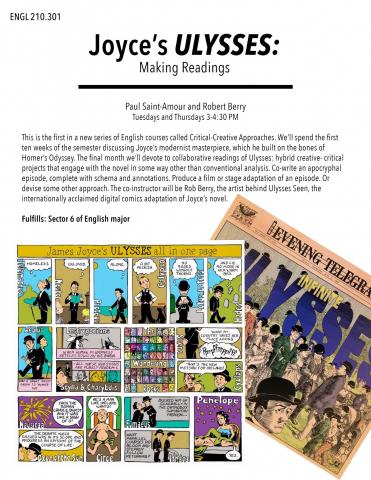 “Joyce’s Ulysses: Making Readings” is the first in a new range of English Department courses called Critical-Creative Approaches. We’ll devote the first ten weeks of the semester to reading Joyce’s novel alongside selected criticism and adaptations in a variety of media. Classroom discussion, mini-lectures, and student glosses will form the basis of this part of the course. We’ll spend the final month of the course collaboratively making readings of Ulysses—conceiving and producing hybrid creative-critical projects that engage with the novel in some way other than conventional analysis. You might co-write an apocryphal episode, complete with schema and annotations. You might produce a film or stage adaptation of an episode that benefits from your readings in Joyce criticism. Or you might devise some other approach entirely. Our co-instructor and primary consultant on the final projects will be Rob Berry, the artist behind Ulysses Seen, the internationally acclaimed digital comics adaptation of Joyce’s novel.

Final projects from this year's class

A short article about the class in OMNIA: All Things Penn Arts & Sciences, by Lauren Rebecca Thacker

A feature about Ulysses and Bloomsday in Penn News Today, including a Q&A and a brief reading from the novel